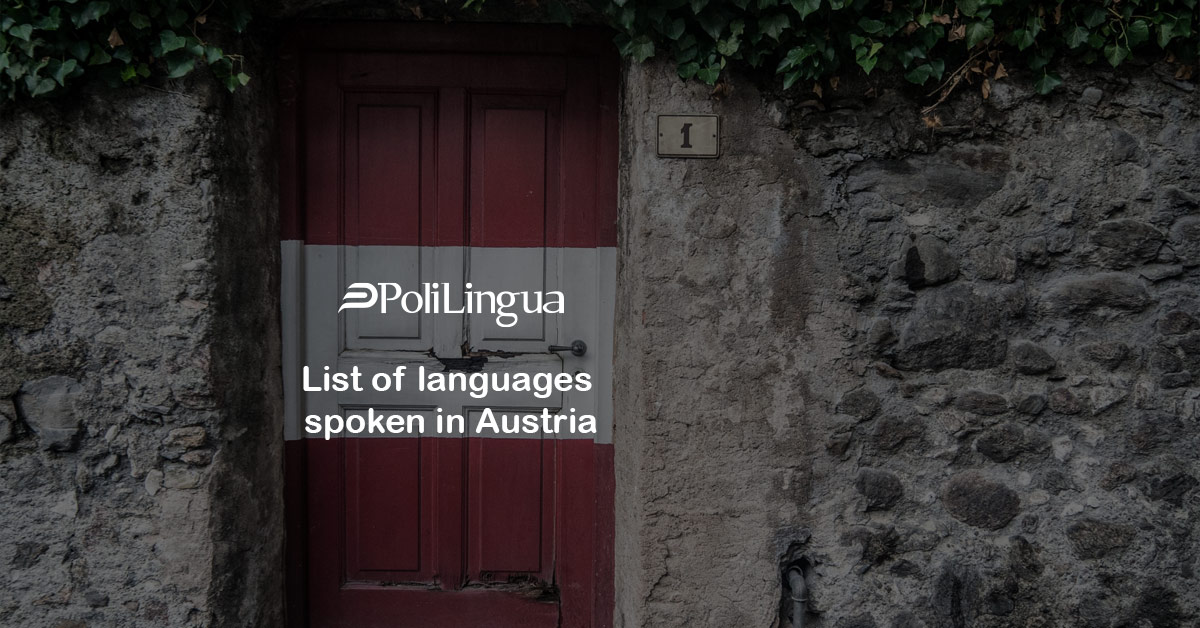 Do you know what languages are spoken in Austria?

The insidious question "What language is spoken in Austria?" will not get a simple answer from people who realize how many complex socio-historical processes affect the development of any nation. While the most likely answer you may hear from many is that Austrian German is the predominant official language in Austria, the truth is more difficult, even if it is mostly correct. Its history is indeed closely tied to a unified Germany, and the linguistic influence has yet to be embodied at the official level.

Austria became the leading state when the German Confederation was created in the 19th century, and its path from empire to democratic state, which, as we know today, was often interconnected with the Federation of Germany. Today this country is one of the most developed countries in the world and is definitely worth a visit. You will fall in love with its beautiful mountain landscapes and picturesque cities, especially its capital Vienna.

Curious what language the Austrians speak?

Tourism does not require serious language training, unlike cooperation with clients from this wonderful country. Austrian German, which is used as an official language in important fields such as media and education.

People looking for the best online translation services should always indicate that they need a translation with Austrian German as their target language as there are still some phonological and vocabulary differences from standard German.

This means that German-speaking people may end up in places where they don't understand anyone and still ask the same question: "Do they speak German in Austria?" Some local dialects may indeed be more complex or even completely incomprehensible to German-speaking people, and now we will look at why this is so.

In addition to the most common language, which has an official status and serves as the lingua franca, you can also find locals who speak one or all of these widely spoken in Austria languages.

All three of these languages should be considered, regardless of whether they are considered the official languages of Austria or have the unofficial status of a mother tongue.

Austrian German is easily understood by those who have learned Standard German, and then those who need high-quality translation of technical documents will not have any problems. It is still preferable to hire a professional with an Austrian-German linguistic education, as regional dialects have a large influence and there may be some differences in vocabulary when translating. Those who visit rural areas may also encounter differences in the languages spoken and find that local accents differ from the official Austrian language.

These differences are reinforced by the history of the countries. It has been the center of influential states since the 16th century. Austria played an important role, whether it was the home of the world famous monarchy led by the House of Habsburgs or the center of the Holy Roman Empire, as well as the Austrian Empire in the 19th century.

Today we know Österreich as a member of the European Union with important achievements. Despite the fact that Austrians speak German, they mostly identify themselves as ethnic Austrians, which everyone should remember when visiting this country.

This unofficial mother tongue has had a significant impact on the official language used in the media, official communication and education. For those wishing to learn this native language of Austria, it should be understood that many regional dialects can be distinguished from Central Austro-Bavarian to Southern ones. Although the language is considered the only unofficial national language, around 7 million people speak it in Austria alone. Austro-Bavarian native speakers can be found in Italy, Switzerland, Hungary and Germany.

The total number of people speaking different Austro-Bavarian dialects is estimated at 13 million throughout Europe, and this widespread distribution is due to historical processes. Since this general term covers several regional dialects, there is no single spelling.

This is why when hiring the best software localization services in Austria, you should still consider Standard German as your target market as it is impossible to create a single product under these conditions. However, the Austro-Bavarian dialects take into account nationality, and this should never be forgotten.

Historical processes and the spread of Germanic tribes led to the fact that in Switzerland, Swabia, France, Italy, Liechtenstein and, of course, in Austria, more than 7 million speakers of the Alemannic dialects of the German language are spoken in Austria. While it is far from being considered the official language of Austria, spoken by approximately 300,000 people, those looking to visit Austria or work with the locals should be aware of the possibility that they might run into native speakers of these dialects.

Linguists identify more than a dozen options that vary greatly from region to region. Each of them has certain phonological, grammatical and vocabulary differences, which makes them quite difficult to understand if a person only knows Standard German. Alemannic is not the only language in Austria, but also overseas, as there are groups of these dialects living in the United States and Venezuela. In any case, knowledge of the written features of the Alemannic language is essential for effective translation of specific texts or targeting this particular group of Austrians.

What language is spoken in Austria besides the official one?

This language, which has undoubtedly become compulsory in the modern world, is widespread in Austria as well, because in educational programs English has been a subject since elementary school. As a result, roughly two-thirds of Austrians are fairly fluent in English, and you may not find someone you can speak English with only in the countryside.

If you are wondering which language is the official language in Austria and if English can have this status due to its widespread use, then the answer is “no, there is no official status for English in Austria”. Despite the fact that Austrians demonstrate a very high level of spoken English, this reflects the country's orientation towards the benefits of globalization.

A significant period in the history of Austria is associated with Hungary, since the Austro-Hungarian Empire existed for more than 50 years in the 19th and 20th centuries and ceased to exist after the First World War. communities, especially within the state of Burgenland. It is estimated that around a few thousand Hungarian-speaking people do not understand the true meaning of historical ties. Although this proves the significant national identity that the Austrians demonstrate.

More than 2% of the population contributes to the diversity of Austria's languages as they speak Serbian, so this language is considered a minority language. The growing number of Serbian immigrants was encouraged by various initiatives highlighting an already existing trend from the 19th century. According to some estimates, up to 500,000 Serbs may already be living in this country. The current government strategy focuses on more restrictive immigration laws, so the “guest worker” phenomenon has lost its relevance.

Due to various socio-cultural processes throughout the country's history, in particular the Ottoman expansion in the 16th century, Austria became home to many Turkic-speaking people. But Turkish is not the national language of Austria. Statistics show that approximately 2.3% of the total population is in this minority, and it is one of the largest in the country.

The government also encourages Turkish workers to come and live there as the policy gives them many benefits, especially in the construction industry. Taking into account all the major minority groups that exist in the target audience is what the best marketing translation service does by default so as not to miss out on even that 2-3% of the population.

Some states, namely Carinthia and Styria, have become home to over 12,000 Slovenes, and their language has become an official regional language in addition to that of Austria. The Slovenian minority group in Austria makes up approximately 0.3% of the total population. The official status guarantees these residents various special benefits.

What language should you speak in Austria?

Visiting a foreign country is always associated with some inconvenience and language barriers. Fortunately, this shouldn't be a major problem in Austria if you've checked the list explaining what language Austria speaks. A significant number of English-speaking locals make Austria a rather comfortable country for many tourists to visit.

German-speaking visitors shouldn't have any problems other than getting used to the Austrian-German accent in most places. They may also meet people who speak Austro-Bavarian and Alemannic, in which case communication will be more difficult.

Still curious what language is spoken in Austria? Since Standard German is the official written language that is used for all official communications and signs, English-speaking tourists may encounter some difficulties. Although the chances of meeting a friendly local who can explain everything are pretty high, since English is widely spoken in Austria, especially in the big cities.

Briefly about the language spoken in Austria

A rich historical heritage has contributed to the linguistic diversity that can be encountered in Austria, as although Austrian German and Austro-Bavarian are the most widely represented languages, there are more minority groups throughout the country.

It is difficult to determine what language Austria speaks if only one answer is needed, even the simple answer "this is German" will not be completely correct. Austria is a mix of languages and dialects that have arisen as a result of various historical, economic and political factors, and also follow the current trends of globalization with the growing importance of the English language.

These circumstances require professional localization assistance, regardless of whether your target audience is located in Austria or abroad. The abundance of regional peculiarities requires a certain linguistic background, and often translation into standard German may not be sufficient. Despite the fact that the majority of the population speaks English, this jargon does not have an official status, which also implies professional help in obtaining a quality translation.