Speaking fluent football: Why a translator needs to be a sports fan
Jul 26, 2021 | Translation services 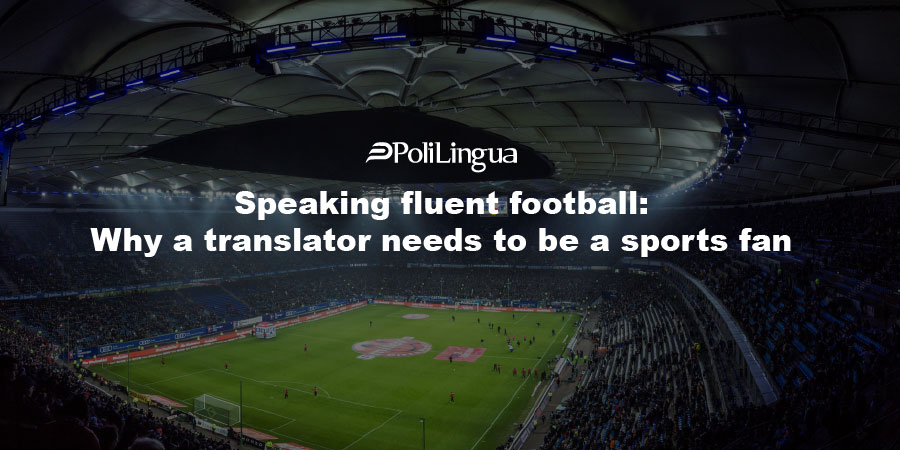 Just like any other sport, football, or soccer as Americans call it, is a universe in its own right. It has its stars, rules, varieties, news, dramas and last but not least, it has its own language. And not only football fans need a translation. European football is a huge business machine with thousands and thousands of players, agents, managers, officials, reporters, medical staff, etc, all from various countries speaking different languages.

Yes, if you speak fluent football, it doesn’t mean a person from France or Italy would understand what you are referring to. So you still need to be fluent in French, German, Italian, or English to know what’s up. Or as language experts would say ‘Dude, you need localization’. English is still a bridge language for many of them, but translation is crucial for the international football world.

Let’s look at some reasons it’s not so easy to speak - and understand - football.

Many faces of football
If you are not convinced that languages play an important role in football, think about America, the land of the free and the home of American football. This team sport doesn't look like its European cousin at all! Sure, they have two teams of 11 players on the field (not a pitch! In the US, they would tell you that a pitch is a baseball throw), goalposts and a ball that looks more like a curvy version of a European pigskin. American supporters would tell you that their football is the only true football but Europeans would be confused since they refer to both versions as ‘football’.

This is just an example of what hardship one may expect to face once they dive into the football/soccer ocean of localization entanglements. In case you think it’s not that hard to tell American football from soccer, then you should know about Canadian football or Australian rules football or rugby football or Gaelic football for that matter. What? Yes, they are all totally real football team sports. But as cool as they may look, we’d better stick to our good old football/soccer just to save our sanity and not to confuse the issue even worse.

What’s in the game?

Football was born in Great Britain and thus through its terminology, it helped to promote the English language in Europe. Some languages borrowed the name of the game - it’s called ‘fotbal’ in Romania, ‘le foot’ in France, ‘футбол’ in Russia and ‘futball’ in Turkey - while it was translated directly into others - ‘fußball’ in Germany, ‘voetbal’ in the Netherlands and ‘jalkapallo’ in Finland (which means ‘foot and ball’, by the way).

Other languages were more careful in using foreign words, which could mean who knows what. So they doubled it with their native word - in Spain the game is known as ‘fútbol’ or ‘balompié’ and in Poland, they spend weekends watching ‘futbol’ or ‘piłka nozna’.  There are a few English football-related words borrowed into other languages - in Italy, Spain, Portugal, Brazil, France as well in Russia and Korea they have ‘gol’ for ‘goal’ which in Japan sounds like ‘goru’ for the lack of a better ‘L’ sound.

The words football brought to England
But popularity is a two-way street - or a pitch in this case. By being so generous and letting other languages borrow its words, in its turn, English found a way to lend some terms from players coming into the country to play the ball and make everyone happy. By the end of the 20th century, the EU allowed international players to come play in English football leagues and there have been many foreigners since then. With their amazing skills, they brought a bunch of words that the English public decided to treat as their own.

The rabona is the perfect example of such borrowing. It’s the technique of kicking the football where the kicking leg is crossed behind the back of the standing leg. And the first to use it - almost 75 years ago - was Argentinian striker Ricardo Infante. In Spanish, rabona means something like ‘to play hookey’ but in football, it’s all about ‘skipping’ the use of the weaker foot. You can always think of ‘rabona’ as a dance move - as what it is in tango - to give it a little bit more Argentinian flair to it.

English native speakers use a few words that are not particularly English but they enrich the experience and show one’s level of their football expertise. For example, Italian teams dream of winning the Scudetto. All teams want to have a manita, and fans could smuggle vuvuzela into the arena to be a bit noisier than they should. Even if you are fluent in English but not a fan of football, you won’t understand what all this means. Told you, it’s out of your league if you don’t breathe football.

Let’s get back to that ‘football vs soccer’ thing
Though many think the word ‘soccer’ comes from ‘a sock’ it’s not entirely true. In the 19th century, when Englishmen first were bitten by the football bug and exported it whenever they went, Americans had already liked rugby a lot. The same rugby game is called ‘rugby football.’ It has been the source of much confusion since then. To tell one from another, entrepreneurial Europeans wrote so-called ‘Association rules’ for their beloved game. As you can tell, the word ‘association’ was too much to take for the New World so its inhabitants shortened it to ‘soc’. So they called the game with the ‘soc’ rules ‘soccer’. Fair enough.

Since then Americans haven’t been able to wrap their heads around the concept of a scoreless match, and Europeans thought that grabbing a football with your hands should be punished by law. Well, you can’t win them all, can you?

The language of football
Even with the pandemic still looming in the background, football today is as popular as ever, and translation plays a huge part in its international success. Football is business and at this stage in the game, language professionals specializing in sports will always be in demand. So no matter what languages you translate or interpret from and into, remember the passion and joy football gives to the world. Maybe it cannot be translated with mere words but it’s worth trying because there are just so many things that can truly unite us and sports as a whole, and football, in particular, is one of them.