What are the differences between European and Canadian French?
Apr 12, 2021 | Language and Culture 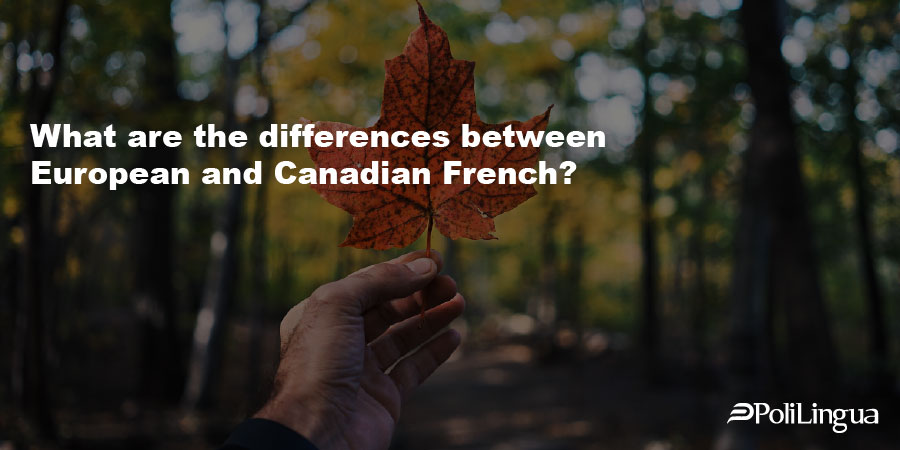 As you may know, French is spoken not only in France and Belgium but in many countries in Africa and in one particular country in North America - Canada. How did it happen? About 200-300 years ago, European countries were on the run to conquer as much territory as they possibly could. Spain and Portugal were busy bringing under their control South and Central America, Great Britain was all over the place including Africa, India and North America, and France colonized the lands of Africans and ones of Native American tribes in nowadays Canada. After Napoleon was defeated and France lost its global significance and yielded ground, Canada became heavily influenced by the British and the English language, though citizens of some of its parts continued to speak French.

At that time, French-speaking Canadians interacted more with British colonists, Native Americans, and then with the first Americans from the US. This cultural exchange was the reason language differences between European and Canadian French appeared. As time went by French Canadians that lived in Quebec, the province in the Canadian East, fenced themselves off (not literally) from the rest of the country and their language gained even more distinct nuances from the one metropolitan France used. Since almost all French Canadians live in Quebec, with a good few also living in New Brunswick and Ontario, their language is called Québécois.

When we talk about French language differences, it should be noticed that we talk about nuances in pronunciation and vocabulary - they are easily overcome by native French speakers. Parisians, for example, have no issues understanding Montrealers - and the other way around. The standard French is the same on both sides of the pond, but when Parisians, Québécois, or Marseillais use their colloquial forms of French, then there could be some missing in translation. Since we focus on translation services, it is crucial to bear the nuances in mind, especially if you are in the market for localization of your content in Québécois or European French.

What is Canadian French? What part of Canada is French-speaking?
As it was already mentioned, Canadian French is the umbrella term for dialects of French spoken in Canada. Three major French-speaking provinces in Canada are Quebec, Ontario and New Brunswick. Over 7.7 million Canadians speak French, it's the second-largest group of population in the country. The modernization of Quebec is a political, economic, social, cultural and, as it should be, linguistic phenomenon. Since 1960, Quebec has moved from clerical-political conservatism and socio-cultural immobility to the era of modernism, change, political revaluation, according to the economic interests of the nation. These changes were not revolutionary in themselves, but they allowed Quebec to catch up and take its place in industrialized and post-industrial societies. The Quebec state thus put an end to a long tradition of non-interventionism and became, over the next two decades, the main engine of collective development.

The French language, for its part, became a weapon of combat and a symbol of liberation from a society that no longer accepted its status as a more or less alienated minority. This new vision of the language, passed from the defensive stage to the offensive stage, gave rise to the ‘epoch of linguistic laws.’ From the status of the national language of French Canadians, French attained the status of a state language, the ultimate outcome of a long process of national liberation. Since 1960s Québécois, the Canadian French language had been gaining increasing importance in the region. Local nationalists who time after time take attempts to secede from Canada, take great pride in Québécois and use it as a primary language instead of English. French speakers from other countries would understand the Canadian variant as long as they don’t face the informal version, which was influenced by English and Native American languages.

Spelling
The French language is famous for its spelling rules so it comes as no surprise that European French and Québécois have different spelling rules. To be clear, most of the words spell the same way in both versions of French but occasionally they can’t help to go rogue.

Grammar
Those familiar with Continental French will have many minor grammatical issues with the spoken language. Prepositions may be shortened, personal pronouns may pop up here and there, something called ‘que’ can be used as a general-purpose relative pronoun, and French Canadians may seem too friendly by using ‘tu’ instead of ‘vous’, the subtlety that can escape an English speaker. In short, there are millions of ways to get into trouble, so you’ve been warned.

Terminology
Québécois has a lot of words that put European French in a tough spot - because they are spelled in the same way but have different meanings. Most of these words are informal and it doesn’t exactly make it easier.

Then there comes loanwords, the word borrowed from English and Native Americans’ languages. One can remember such examples as ‘melon d’eau’ or ‘pâte à dents’ which are literal translations from English that could confuse French speakers a lot since they are used to call those things ’pastèque’ and ‘dentifrice’ - watermelon and toothpaste, respectively. And these are just two examples of many. But don’t you worry - the terminology and loanword issues run wild only in the colloquial language so if you speak the official version of French, you will hit it off with French Canadians in no time.

In the 18th century, the territory of modern Canada came under the control of the British Empire. These events have dramatic implications for the Canadian version of the French language. Though words borrowed from English are not customary in written documents and should be substituted with French alternatives, in informal speech they are widely used. It means the translation localization process in Canadian French is a bit more complicated than it may seem.

Pronunciation
This should’ve been the first spot on the list of the differences between Québécois and European French. If they have dialects in France, it’s safe to say there have to be differences in the way they pronounce words in France and Canada. The pronunciation in Canadian French turns out to be more nasal with a shift in vowel sounds; sometimes flatter, not rolling ‘r’; and a bit hissing ‘d’s’ and ‘t’s’.

Cultural differences
Without mentioning loanwords from the languages of Native American tribes that are another tough spot for Europeans, it should be pointed out that Canadian French has many unique words that could leave French speakers at a loss. For example, if your French Canadian friends offer you to get some ‘poutine’ (they would pronounce it ‘putsin’, though) it doesn’t mean they want to talk politics (Hi, Russia!). They want to share with you the wonders of Canadian French fries with cheese and gravy. Delicious! See how misleading words could be sometimes?

What do language translation services do?
The Merriam-Webster dictionary definition indicates that it is ‘a rendering from one language into another.’ Although there are many types of translations, they will all take care of this main task of taking a product in one language or dialect and placing it in another. Usually, an informative article would try to give you more background information on a topic, but trying to identify the ancient history of translations is an impossible task. Although there have been many famous translators (and translation errors), the origins of this profession probably date back to the first separation of human languages ​​to our early days.

How much should you pay a translator?
The price of a translation depends on many factors: complexity and technicality of the content to be translated, the language pair concerned, volumes and delivery times, repetitions in the content, etc. Why and how do these elements impact the translation prices?

Specialty: highly specialized and field-specific texts (medicine, management, legal, certified, finance, accounting, life science, etc.) and technical content (energy, oil, IT, food industry...) are supported by highly specialized translators. The rates charged vary according to the field of specialization, availability of professional translators or even the niche in question (for example, Danish translators who are experts in actuarial or medical devices are part of a very small elite).

Urgency: significant price changes may be applied for the delivery time with a word volume ratio exceeds 1,500/2,000 words per day. Surcharges also apply if the task includes overtime on weekends, public holidays, or evenings, a last-minute booking of an interpreter, the delivery of a translation in less than 24 hours.

Format: Word, Excel, PowerPoint and HTML files usually have no price impact. The processing of unwritten (audio and video recordings) or handwritten content, the translation from non-editable documents (PDF, JPG, AI ...), the production and integration of subtitles or voice-over, DTP operations are subject to ad hoc pricing.

Options: specifications play a noticeable role in preparing the estimate, particularly if you want to benefit from services besides the translation of a text (proofreading by a third party, localization, dubbing, etc.). Depending on the case, additional services may be subject to dedicated pricing, a flat rate or a revaluation of the basic unit price.

What are the 4 types of translation?
Translation from one language to another or into several languages ​​affects all areas. With the development of the internet and international markets, companies increasingly need to translate documents, their websites, and even applications to reach a wider audience. Translation into several languages ​​thus makes it possible to reach new markets and meet the needs of increasingly large and varied business customers. Whether you want to translate documents, platforms or simply out of curiosity, here we present the different types of commercial translation that exist in terms of content, but also of format. This will be useful if you want to better understand the field or simply situate your needs to call upon adequate resources in your translations.

The content of translations can be classified into different types. Each of them requires specialized skills on the part of the translators in order to produce a document that is faithful to the original and above all that is able to relay the original message. Here are the most common types of translation found in the business translation community:

What is the best translation service?
PoliLingua is an officially accredited leading UK translation agency with the head office in London, UK, and branch offices in the United States, Spain, Italy, France, Germany, Gibraltar, and Moldova. We work with native expert translators from around the world to ensure your translation meets the highest standards in the industry. In combination with the deep expertise in the dedicated field, our translators have the edge over the competition. PoliLingua professional translation company works with 8,000+ translators of 100+ languages in as many countries across the world. They help us work with any project, regardless of its volume and turnaround times.

We handpick the translators we work with so you can rest assured the translation you get will be of the highest quality, accurate and by accepted standards. This means our professionals are not only proficient in the target language but also have expert knowledge in the industry or area of activities they work with. There are so many language service providers out there that the real challenge is choosing the best provider to meet your needs. For almost 20 years, PoliLingua has been helping organizations communicate with clients, employees, and partners around the world. With over 100 languages available for our translation and interpretation services, we have the resources to meet your language needs quickly and efficiently, always.

At PoliLingua, we have proven over the years we deliver high-quality interpretation and translation solutions through a set of proven processes and a strict selection of linguists, and by creating a culture of continuous improvement in line with the changing needs of our clients. With robust security assessment processes and ISO-accredited quality management systems, we provide top-quality language services at very competitive rates.