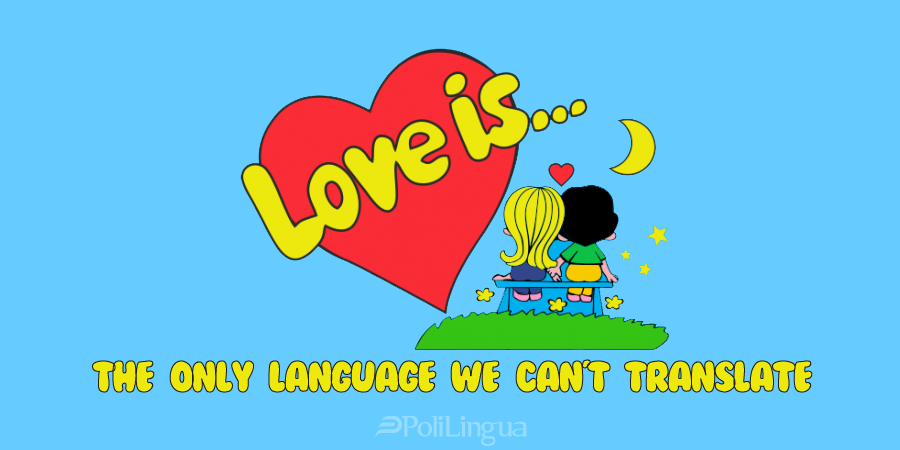 Language, love and everything in between
St Valentine's Day is just around the corner and this special date allows us to express all our affection to those we love. Of course, there is no need for a specific day to make a declaration of love or to show your love. The words of love should reach the loving ears every day, as every moment spent together becomes an opportunity to express one's feelings. But there is one thing everyone agrees on: there are as many ways to express love as many cultures in the world, so let's take a look around just in case so you can find your love around the world!

Tamil
You might never think about it this way, but there are languages that have more than one word for ‘love’. And there are real champions in this category. For example, the Tamil language, which is spoken by over 70 million people in South Asia, has over 50 words meaning love. There is a word meaning ‘love in happiness’, one meaning ‘love soaked in deep feeling’, one for ‘melting in the heart due to love’, and even for ‘love as a soft feeling towards another’. Amazing, right? Plus, you can use this information as a conversation starter the next time you see someone nice.

Inuit
Love among Inuits is very modest and more based on tenderness and company. No mouth-to-mouth kisses so, in public or private, this is very badly perceived and is not done. It might have something to do with lower temperatures and not shyness of Inuits - since it’s rather problematic to kiss when it’s 50 below zero outside. Anyway, Inuits are not strangers to showing their love and they do it with the well-known ‘nose rubbing’ or ‘Inuit kiss’. It’s as commonplace as a ‘usual’ kiss, so if you’re lucky enough to fall in love with an Inuit person, now you know what to expect.

Asia
In Japan, contrary to the Western culture, the most passionate kisses are on the neck or hands, but not on the lips. All relationships begin with the usual passion, and once married, love turns more into affection, and the wife must support her husband and devote herself to the well-being of the home and children. For Westerners, it may seem a bit old-fashioned, but as the saying goes, do as the Romans do - or in this case - do as the Japanese do.

In China, kisses are only done in the greatest intimacy. You will never see a couple kissing in the street. And again, it has nothing to do with shyness and open-mindedness - in China, the Party dictates the policy, and the rank and file have no other choice but to obey. But let’s not talk politics and stick closer to the topic.

In general, in the Asian culture, feelings are not expressed physically. Touching is not an option during a conversation, especially when one talks with a member of the opposite sex. In couple relationships, this rule also applies, unlike in the Latin culture, where the expression of attachment is expressive, tactile, and passionate, in public and in private.

Europe
Let's move on to Europe, if we had to choose the most romantic and the least shy in terms of affection, it would be Italians. 50% of their daily messages contain the word ‘Love’, men are never stingy with compliments, attention and not stall to show their affection.

By the way, there is a huge difference between ‘Ti amo’, ‘Ti voglio bene’, and ‘Mi piaci’. And it’s just another example of why contextual translation is so important and why you may need a professional language expert when you want to communicate your ideas into another language. Look no further, as PoliLingua has you covered. We work with native speakers of over 100 languages and know everything about translation, interpretation, transcreation, etc. Now, back to our topic.

In the past, Celtic cultures, who had a great interest in nature and its power over daily life, believed that the act of kissing your beloved one had real healing properties for the body. What a beautiful heritage… and another reason to show your love.

Yeah, but why people kiss?
Anthropologists claim that 2 million years ago, hominids were already kissing each other, but not for romantic purposes of course. Kissing as we know it today originated from the gesture of hominid mothers to pre-chew food in order to feed the young directly from mouth to mouth. In a way, it is the same thing mama bird does when feeding her nestlings. Another theory would be that humans kiss each other after observing animals doing the same as a sign of affection.

In either explanation, the animal instinct is something very present and comes to the surface even in our most human moments, the moments when we love each other. Why do we say we ‘find our half’ when we find someone we love? The myth of ‘being split in half’ comes from ancient Greece, where three kinds of humans coexisted: men, women, and androgynous (both female and male). The latter also had four legs and two heads: they were so powerful that Zeus, fearing them, divided them in two, making them eternally condemned to seek their other half.

And a little bit more on love
We are so used to think that our world is big, that people who live in it are very different and that everything is against us, we sometimes forget that on the contrary - everything brings us together. Of course, there are billions of us on Earth and each human being, built on its own cultural and societal foundations, is different. But all our differences fade compared to the love and the way we aspire to it.

As we have seen, there are many ways of expressing love and they are very different but one thing brings us together: our affection for our loved ones, our family, suitable candidates in our quest for love and happiness and our faith in the future of humanity, even after a bad love experience.

On this Valentine's Day, let's not forget to love, our spouses, relatives, parents, but also our neighbors, the one next door or the one at the other end of the world, whatever their language, religion, culture, or skin color.