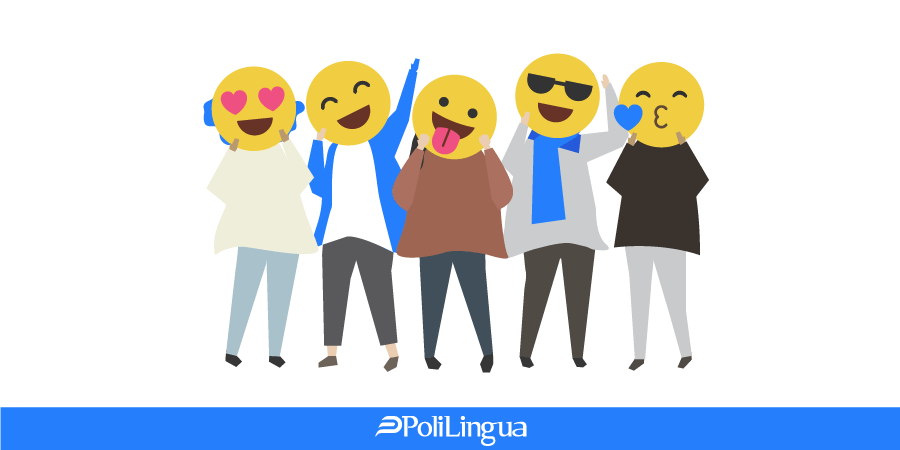 Virtual communication has put in front of us new possibilities of interaction. Facebook, Snapchat, Twitter, Instagram and a network of other apps calls for improved and more dynamic means of expression by regularly releasing fresh emoji, ready to serve to the distribution of less ambiguous messages.

The graphical elements coined to compliment our speech by adding emotional resolution to it, constantly rise in number. Till now, there are 1,085 officially-recognized emojis in circulation. While some may consider the usage of icons a primitive approach, others sustain that the ideographic elements widely involved in Social Media might extend their area of use by becoming a separate language. There is even an emoji movie, released in 2017.

Is the popularity of the tiny yet influential pictures enough to bring about such a significant event or should we qualify it as a rumour? Will we need emoji translators in the future? There are many aspects to be considered, but first  let’s take a quick look behind and see how things started.

The first emoji was created by the telecom NTT Docomo in 1999 and used to be of a small size and low in resolution as well, more precisely 12 pixels squire.

The icon, which was of a single color, was designed for Japanese cell phones and served as internationally recognized  ideograms for symbols and concepts. For instance, the heart of a snowman used to indicate cardiac organs or winter yard sculptures.

Emoji became progressively popular in 2010, widely used for mobiles, particularly in the West.

The symbol made headway till nowadays when it became ubiquitous.
The most recent event refers to the addition of new emotions added on Facebook instead of the usual Like button. Consequently, the user acquired more possibilities for expressing his opinion by having displayed a list of emoji when reacting to a post or live video.

However the name of the icon might take you to the idea of emotion, the word actually comes from Japanese and is translated mot-a-mot e-picture + moji- character. The resemblance with the word emoticon is simply a coincidence.


Emoji at work. What do the researchers say?

The question is how acceptable is the use of Emoji faces at work? The answer is multifaceted. Let’s slide along both sides by exploring some valuable observations on this subject.

According to a study run by researchers at Ben-Gurion University of the Negev in Israel, including smiley faces or similarly snappy icons may suggest incompetence and can also hinder the performance of the employees. Dr. Ella Gilkson affirms the following: “Our findings provide first-time evidence that, contrary to actual smiles, smiley do not increase perceptions of warmth and actually decrease perceptions of competence.

A series of  experiments have been conducted by BGU, the University of Haifa and Amsterdam which implied the participation of 549 people from different countries. The study consisted in reading several work-related emails from unknown persons in order to rate the perceived degree of warmth and the level of competence. Some messages were accompanied by emoji, others weren’t.

The investigation yielded some unexpected results. The use of smiley emoji images turned to be of little effect on the level of warmth perceived by the reader, while the level of competency has shown significant decrease. Another important aspect mentioned by Dr. Glikson revealed that adding emoji can be distracting, removing important communication boundaries. “When the participants were asked to respond to emails in formal matters, their answers were more detailed and they included more content-related information when the email did not include a smiley.” She explained that the diminished sense of competence perceived was directly linked to the presence of perky pictographs.

Another interesting observation involved a spark of sexism in emoji inclusion. When dealing with an email from a stranger, the male participants were more inclined to assume the message which contained graphical elements belonged to a woman.


Can an emoji make you lose your job?

Though emoji can be funny and entertaining, their implications may cause serious misinterpretations. A Chinese employee was fired after sending an emoji as an answer instead of the traditional text. The unfortunate case took place in China when the manager of a bar in Changsha, Hunan province, asked the employee on WeChat to send some meeting documents. The reply consisting of an OK emoji was perceived as an indisputable sign of “poor discipline” and immaturity, determining the boss to fire his worker.


The explanation sounded like this: “You should use text to reply to the message if you have received it. Don’t you know the rules? Is this your acknowledgement of receipt?”.
The employee said “I have worked for many years and this is my first encounter with this kind of stupid situation. I am good-tempered therefore I didn’t retaliate.”


When asked about their opinion, the colleagues claimed that the boss reaction appeared to them quite exaggerated. The case went viral with 280 million views for posts of screenshots of the conversation. Some affirmed that “any reason is valid if your boss wants to fire you”, while others said: “I think a good leader should be able to accept different people’s communication styles and characteristics”. As a conclusion, Wang Li-ping, a Renmin Business School professor specializing in human resources said: “But this is what may happen in small and medium-sized companies as they may not have comprehensive regulation or system related to this kind of situation”.

Next time when you are using your emoji keyboard should you think twice when adding a smiley face to your greetings or including a crying face when critical issues are addressed? One way or another, several aspects defining internal regulations of the company should be considered. Perhaps it is a matter of personal, and mostly professional subtlety.


Is your brain affected by emoji?

To sustain the impact of the emoji, a study conducted at the University of Illinois evaluated the brainwaves responses to the sentences accompanied or not by icons. According to Benjamin Weissman and Darren Tanner “the brain processes ironic emojis in the same way as ironic language, indicating emojis convey meaning in a sentence”.

Researchers studied the brain patterns in both situations and consequently concluded that “sometimes the emojis matched the literal meaning of the sentence, but in other cases they were construed as indicating irony”. The study discovered a kind of “error signal” that arises when a person encounters something linguistically unexpected.

The study gathered 106 participants in order to read the same text, with a different emoji added at the end of each identical sentence. The one including a wink smile was perceived as ironic by majority. The surprising results have shown that the brain waves emitted by the ironic perception were the same as those implied in a traditional conversation suggesting irony. Researchers have concluded that pictographs can play an essential role in conveying a message by replacing the missing gestures and facial expressions.

Can emoji be used as evidence in court?

Despite the controversial evidence and various opinions, emoji has extended its foothold showing up in court cases. Are you wondering if courts are ready to face such an unexpected turn? Let’s explore the possibilities.

First evidence states the presence of emoticons at court in 2004. More recently, the graphic symbols made room for their cousin emoji, but still courts are quite reticent when it comes to the language of emoji.

According to an article by The Verge, in 2017, a couple in Israel has been missguided by the implication of emoji in a sentence written by the landlord, translating it as an intent to rent his apartment. The couple suffered the loss of a great amount of money after sending a text of confirmation followed by a string of emoji, enlisting a suite of positive signals, such as a bottle of champagne, a squirrel, and a comet, and resulting in renting a different apartment and ignoring the calls. The court declared that the couple acted “in bad faith”, leading the landlord to misinterpretation of the emoji meaning and eventually, the loss of thousands of dollars. The problem with acceptance of emoticons as proof in legal matters consists in its confusing meaning. “They show up as evidence, the courts have to acknowledge their existence, but often they’re immaterial” Goldman revealed. “That’s why many judges decide to say ‘emoji omitted’, because they don’t think it’s relevant to the case at all”.

What makes emoji confusing?
The topic is of very sensitive nature, especially when subtle nuances come into play, such as culture or the type of device used for communication. For instance,the gritting teeth emoji  might look a lot different depending on what type of mobile you are using. And this is not all. The  disparities regarding the design and subjective views may impact the perception in a radical way. The issue is being analyzed from different perspectives and the fact that there are no emoji experts so far is a solid impediment. “Emoji usually have dialects. They draw meaning from their context”, Goldman says.

Are emoji actually making us lazy ?
Emoji has shown a wide use not solely amongst millennials. The Independent says that almost 76% of 25 to 29-year-olds consider themselves as “frequent” users and an estimated number of 21% are using emoji only “occasionally”. Concluding from this, only 3.4% represent non-users. If we dare to dive more in-depth, we discover that 84% of women consider that emoji can sometimes express their message more accurately than words could.

A loss in attention span has been noticed, which makes the emoji insertion a quick and lazy means of communication. Exactly, lazy. Some may consider the abbreviations has taken the language too far, by encouraging the speed over quality. Losing a vowel or missing the doubles in word doesn’t imply the risk of looking uneducated anymore, as long a graphic symbol can replace all the information you intend to communicate. Is the world losing its capacity to be patient or is just a matter of convenience? It should still be discussed.

In the end, who wins the debate?
From there we land to our primordial question: Can emoji become a separate language or way too many baffling issues stand in the way? Keeping track of the above-mentioned perspectives, we cannot miss out on basic elements that are the bloodhound of the language.

The former professor of linguistics at UC Berkeley, Johanna Nichols, declared that  the key for distinguishing a language is “mutual intelligibility.” If, for instance, two people cannot understand each other, the language is in fact a dialect. However, the mutual intelligibility alone cannot give a sure answer. However emoji may take us back to the idea of primitive communication, it does not consist of hieroglyphs. As a consequence, the same emoji symbol can be perceived differently by two people. Moreover, emojis cannot be conjugated as it has no grammatical rules.


If we comply strictly with the definition of language, emoji loses ground. Meanwhile, we can take advantage of its colourful and dynamic appearance, adding to our virtual communication a spur of emotion.